Welcome to the Homepage of TLF TimeLineFilm GmbH

The film and TV production company TLF TimeLineFilm GmbH is located in Fürth/Germany and produces contemporary-history documentations for the national and international TV market.

To mark the 90th birthday of Henry Kissinger, the German channel BR Fernsehen showed a repeat of “The Kissinger Saga, Walter and Henry Kissinger – two brothers from Fürth/Germany” at 10.30 pm.

The Kissinger Saga in the USA: 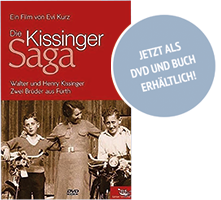 Information about the film

On the 20th anniversary of German reunification, the following film – which was shot at original locations in Germany, USA, Israel, England, Austria and Switzerland – was shown on ARD:

More information about the film

“No interviews on my private life” – that was Henry Kissinger’s motto for decades to keep a distance to curious journalists. The TV-journalist Evi Kurz, however, did never give up on her idea of creating a Kissinger family portrait. For quite some time, she persistently kept building a bridge of mutual confidence from the Kissinger hometown of Fürth/Germany to the United States of America, which eventually proved successful. Her documentary reflects the result of years of research and many personal conversations. This is how the portrait of two Jewish teenage boys from Fürth/Germany was created who were forced to flee Hitler-Germany. Although both of them made great careers in the USA, they have never forgotten their native country.

March 19, 2009: The English version of the book “The Kissinger Saga: Walter and Henry Kissinger, Two Brothers from Fürth” is published by Weidenfeld & Nicolson in London

Invitation for an Event in New York