“I never give interviews about my personal life” – that was Henry Kissinger’s first answer to a letter from Germany. But eventually he changed his mind.

Evi Kurz, the TV journalist from Henry Kissinger’s former hometown Fürth, had not given up and proved successful after a period of two years: For the very first time in his life Henry Kissinger talks in front of a running camera about his private life, about his brother, his parents, his children and grandchildren; he talks about his childhood in Germany, how they fled the Nazi regime, about his new life in America, about his relationship to Germany and the German people.

And because Henry made this first step, others followed: first of all, his one year younger brother Walter, “the other Kissinger” (newsweek), who made a real big career in the American industry. And there are other family members and people who accompanied the Kissinger family on their long and exciting way of life: relatives and friends, former neighbors and students, journalists, such as Marvin Kalb, or politicians like former German Chancellor Helmut Schmidt and former German Secretary of State Hans-Dietrich Genscher. They all talked exclusively with Evi Kurz.

This is how a fascinating and touching family saga was created, the “Kissinger Saga” – a unique portrait of Louis and Paula Kissinger and their two sons Henry and Walter. 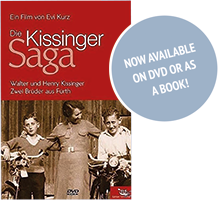